You can't have projects of this complexity without people like him who support the dev team, you should get people to sit down and watch what he does. 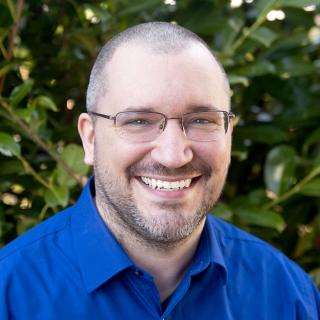 So growing up going to band camp every summer is pretty geeky. The fact that it was "jazz" camp maybe makes it slightly less geeky. Ending up playing saxophone and dancing on stage during an episode of "Showtime at the Apollo" with band the Inner City All Stars--not geeky at all. (Darren is on the left.)

Though a surprising number of Lullabots play instruments, Darren is the only one who can say he's "played the Apollo." He also plays six instruments; saxophone, flute, clarinet, harmonica, piano, and guitar. It's amazing that he can find the time to practice given that he has six kids.

Those kids are expensive, so Darren switched gears a while back and started looking for more lucrative ways to make a living. He got into web development using PERL and PHP3 back in 1999, and got into Drupal in 2007 while he was head of the University of North Texas Web Development Center. Before joining Lullabot, he worked on various projects for higher-ed institutions and led the construction of major Drupal sites at Scholastic.com.

Some of his projects at Lullabot include leading improvements to msnbc.com, replatforming a major internal news site for Qualcomm, and launching nammfoundation.org

Though a Drupal development talent in his own right, Darren is a technical project manager for Lullabot. He even has whiteboards and scrum meetings in his kitchen, to make sure the family chores get done. The kids love that. Not really.

Professionally, Darren prefers Agile to Waterfall, has an interest in the history of software development and how that’s shaped the way we work today. He runs his scrums from his office in Denton, TX. His self-proclaimed "crop of nerds" includes wife Jennifer and kids Katy, Jacob, Emily, Rebecca, Amanda and Claire.

Darren plays the saxophone, but only has 1.5 lungs. Go figure!